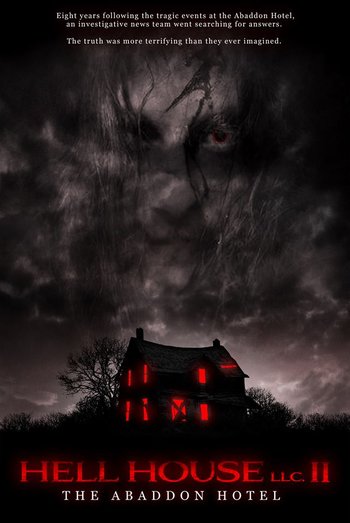 They're all in the dining room. They have no eyes.
Advertisement:

Hell House LLC II: The Abaddon Hotel is the indie Found Footage horror sequel to Hell House LLC, written and directed by Stephen Cognetti released digitally on September 20th, 2018. Eight years after the disastrous 2009 opening night of Hell House in Abaddon, New York the town has sued the documentary crew who released the original Hell House footage and has police guarding the hotel around the clock. Thrillseekers and amateur ghost-hunters have broken into the Abaddon Hotel with four going missing. Other mysterious, unexplained footage surrounding the Abaddon Hotel has surfaced online. In response to an anonymous tip a team of independent investigative journalists led by reporter Jessica Fox recruit Mitchell Cavanaugh, the only known surviving member of Diane Graves' documentary crew, and break in to the hotel searching for answers. What they find is more horrifying then they could have possibly imagined.