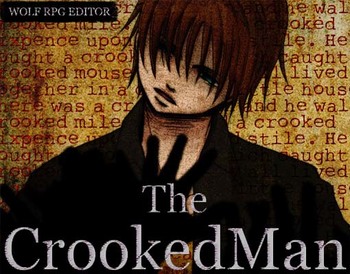 The Crooked Man is a Japanese freeware horror adventure game, made in Wolf RPG Editor by Uri. It is the first game in the Strange Men Series, followed by The Sand Man, The Boogie Man and The Hanged Man.

David Hoover has just finished moving into a new apartment during a rough part of his life, but some incredibly odd happenings within the unit leave him shaken. When he tries asking about the former tenant, there's little information on the man in question. Curiosity piqued, David sets out to find him. Along the way, he runs into a terrifying humanoid monster known only as the Crooked Man, who is intent on killing David for some reason.

An English translation can be found here

See also Paranoiac and Mermaid Swamp, by the same creator.

The Crooked Man contains examples of: