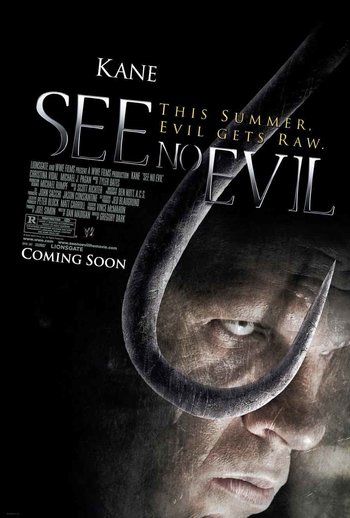 "Do you see the sin?"
Advertisement:

See No Evil is a 2006 Slasher Movie starring Glenn Jacobs (aka Kane) of WWE fame and Rachael Taylor.

The film opens with two officers busting inside Serial Killer Jacob Goodnight's (Kane) home, saving one of his victims and lodging a bullet into his head. Cut to some time later, the surviving cop Williams (Steven Vidler) is now working in a juvenile prison and has been tasked to take some delinquents to clean up the old Blackwell hotel. Unbeknownst to them, Jacob has taken residence there and starts killing them off.

On August 6, 2013, WWE Studios announced See No Evil 2, with Kane reprising his role as Jacob Goodnight and the Soska sisters directing.

Not to be confused with the 1971 thriller of the same name starring Mia Farrow.