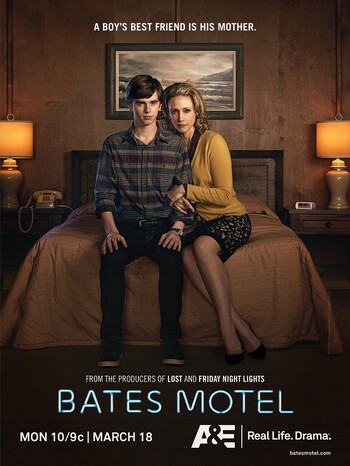 We hope you enjoy your stay.
Advertisement:

Bates Motel is an American drama television series on A&E starring Freddie Highmore and Vera Farmiga. The series is a spiritual prequel to and, in its final season, Broad Strokes adaptation of Alfred Hitchcock's iconic Psycho, and depicts Norman Bates's Sanity Slippage whilst set in modern times.

The series kicks off with the sudden death of Norman's father, prompting Norman and his beloved mother Norma to set up a new life in the coastal town of White Pine Bay as owners of the eponymous motel. However, their relationship is far from stable and the town is hiding secrets of its own...

Not to be confused with the 1987 made for TV Movie of the same name.