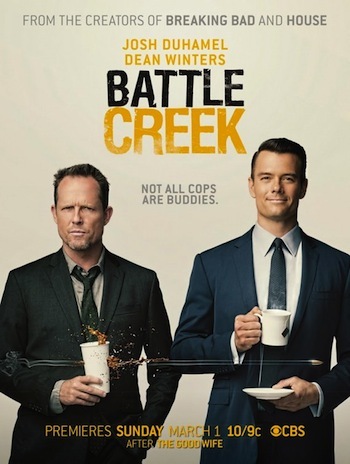 Battle Creek is a Police Procedural, created by Vince Gilligan, that debuted on CBS in the 2015 mid-season.
Advertisement:

Set in a fictionalized version of the city of Battle Creek, Michigan, the show focuses on the efforts of Detective Russ Agnew (Dean Winters) as he tries to keep his home safe while dealing with tight city budgets, failing equipment, and insufficient training. The FBI sends Special Agent Milton Chamberlain (Josh Duhamel) to provide assistance, but Agnew takes an immediate disliking to the newcomer. Unfortunately, the two are stuck together and have to try and cooperate to make Battle Creek a better place.

The series was not renewed for a second season.