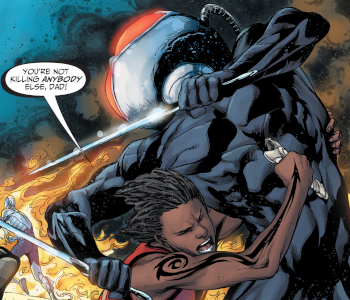 You think your Thanksgiving's awkward?
"If you're going to take me on, son, you're going to have to bring your game up to a whole different level."
— Lionel Luthor to Lex Luthor, Smallville
Advertisement:

Some fathers just really don't do well by their kids, at all. Some are aloof, remote, and offer scant praise for their children's achievements. Some expect their kids to act like adults from an early age and offer no guidance, whatsoever. Some will abandon their kids. Some will come to betray their children at a crucial moment. Some are just downright abusive. Some will even go so far as to try Offing the Offspring. A select few will go the extra mile to take every action and every opportunity to foil their children's plans and ruin their lives and become an Archnemesis Dad (or a Foe Pa).

This trope is Exactly What It Says on the Tin: a father or father figure who also happens to be a prime candidate for the title of a character's Archenemy. He could be anywhere on the Sorting Algorithm of Evil, but whether he's the Big Bad, The Dragon, or something else entirely, any story featuring him is likely to be emotionally charged at the least. Normally this will be a case of It's Personal, and may well include offers of We Can Rule Together, but not always: particularly cold-hearted fathers may declare I Have No Son! and treat the child in question as just one more problem to be solved.

Compare Oedipus Complex, the general archetype of patriarchal resentment (the father figure does not necessarily need to be an archnemesis in that one). Often the result of years of I Hate You, Vampire Dad. Might overlap with Luke, I Am Your Father. See Abusive Parents and Parental Neglect for the more mundane version. See Offing the Offspring and/or Patricide for what this might lead to. This may also explain why someone Hates Their Parent. A common subversion of the trope is the Anti-Climactic Parent reveal that usually shows the father as a rather harmless Sitcom Arch-Nemesis to their child rather than an actual antagonist. Sometimes this happens when the father is a Notorious Parent, as in most wanted by any or every authority.

This trope's Distaff Counterpart is the Evil Matriarch, with whom this character type is rarely ever paired up with. The inversion is Antagonistic Offspring. Contrast Daddy's Little Villain and Overlord Jr., where the evil father dotes on his kids who are just as evil as he is. See Evil Uncle for when it's not dad but his brother who goes out of his way to ruin your day. See Cain and Abel when the conflict is between siblings.