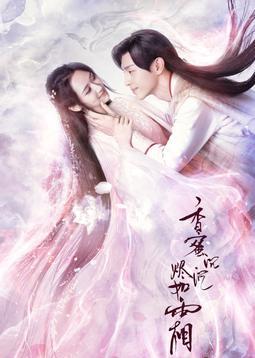 Ashes of Love (Chinese: 香蜜沉沉烬如霜; pinyin: Xiāng Mì Chén Chén Jìn Rú Shuāng) is a 2018 Chinese fantasy series based on the internet novel of the same name (alternatively translated as "Heavy Sweetness, Ash-Like Frost") by Dian Xian. A second season is rumoured to air in 2022. It starts Yang Zi and Deng Lun in the leading roles.

The series follows Jin Mi, an innocent and naive grape sprite who been fed an Unfeeling Pill that suppresses her ability to feel and recognize love. Having been sheltered inside a barrier in the Flower Realm her whole life, Jin Mi leaps at the chance to follow Xu Feng, the Second Prince of the Heavenly Realm, to his home realm after she accidentally rescues him. Completely unaware of romantic implications, decorum of the Heavenly Realm, and her true parentage, Jin Mi spends a hundred years causing hijinks in the Heavenly Palace at Xu Feng's side as his Reading Aide. Before long, Jin Mi finds herself drawn into a love triangle between Xu Feng and his brother Run Yu, and the power struggle for not only the Heavenly Throne but for the control all Six Realms in the world.