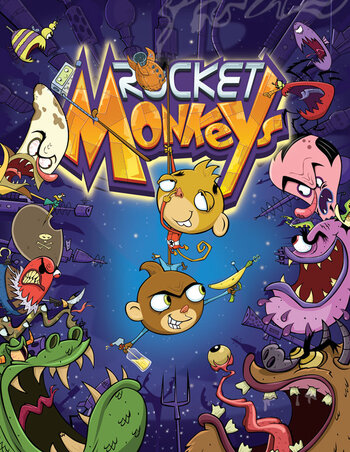 It's monkeys in space. What could possibly go wrong?
The Rocket Monkeys
They're monkeys in space!
They try to be heroes
But they're easy to replace!
—The first lines of the show's theme tune
Advertisement:

Rocket Monkeys is a Canadian animated television series produced by Breakthrough Entertainment (the same studio that created Atomic Betty, Captain Flamingo, and Jimmy Two-Shoes) and animated by Atomic Cartoons (who also animated Atomic Betty and Captain Flamingo). Created by Dan Abdo and Jason Patterson, the show ran from 2013 to 2016 with a total of 65 episodes over 3 seasons.

The show centers around dimwitted simian brothers Gus and Wally, who are members of GASI (Galactic Animal Space Institute), an organization of animal astronauts focused on interplanetary exploration. The brothers possess an astounding lack of intelligence and skill, but when all the good GASI teams are unavailable, Gus and Wally are usually the ones who end up saddled with whatever life-threatening space missions their boss Dr. Chimpsky needs completed. Thus, the pair travel through space on their makeshift rocket with their loyal if beleaguered Robot Buddy YAY-OK, encountering various strange lifeforms and worlds, as well as dealing with the occasional galactic evildoer. But Gus and Wally, being the incompetents they are, always find a way to screw things up, and as a result, have to clean up their own messes wherever they go.

Wally tries to help Gus make their own "Monkey Fragrance".

Wally tries to help Gus make their own "Monkey Fragrance".