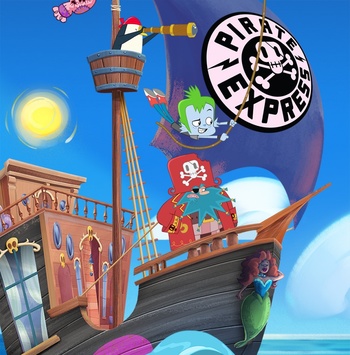 "Yo-ho! Pirate Express!
The awesomest ship that ever be!
A dimwitted crew on the seven seas!
Pirate Express!"
— The chorus of the show's Expository Theme Tune

There's being Screwed by the Network and then there's what happened to this show.

Pirate Express is an Australian-Canadian animated series produced by Atomic Cartoons and Sticky Pictures Ltd. that aired on Teletoon. All 26 episodes of the series aired in 2015 for a single week, with the show then being taken off the air without any further word. On the other hand, it also aired on 9Go! in Australia.

The show stars Newt, the 12-year-old son of Poseidon, who one day discovers a strange ship in a bottle in his father's office in Atlantis. The ship is in fact a miniaturized version of a real pirate ship belonging to a gang of pirates who had attempted to rob the god of the sea three hundred years ago. The pirates were imprisoned with their ship as punishment, but are also still alive centuries later. Of course, Newt accidentally breaks the bottle and frees the pirates along with their ship. To save the bumbling buccaneers from his father's wrath, Newt makes himself the captain of their ship, which he rechristens Pirate Express, to the chagrin of the crew's original captain Henri De LaPoutine. Now it's up to Newt to teach his motley crew of sea dogs that there's more to life than plundering treasure as they sail the globe in search for adventure and cause plenty of high seas havoc in the process.