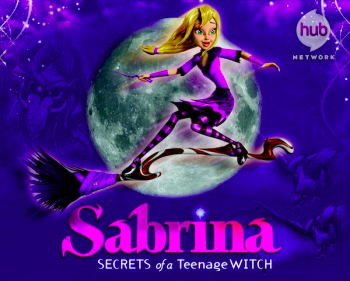 Sabrina: Secrets of a Teenage Witch is a French-Irish-American-Canadian-Indian CGI fantasy-comedy series based on the Sabrina the Teenage Witch franchise that aired on The Hub and was produced by French animation studio MoonScoop (Code Lyoko). It's the fourth animated series based on the character, following Sabrina: The Animated Series spin-off Sabrina's Secret Life ten years prior, and the fifth television show in the franchise overall.

The show serves as a Continuity Reboot of the series, with Sabrina (Ashley Tisdale) now being a witch princess destined to rule the magical world. Despite this, Sabrina continues to live a dual life of living in the human world and attending regular school during the day and traveling to the magical realm to hone her sorceress skills at night. All the while, she must also do battle with enemies who threaten to do harm to her family and expose her secret. Other changes made include everyone believing that Sabrina's pet cat Salem is a normal feline, with Salem also being a (reluctant) spy for a now evil Enchantra who is meant to make Sabrina's life miserable.

The series only lasted a single 26-episode season, which aired from October 2013 to June 2014. All episodes are available, sans the first two if you live in the United States, for viewing on Kabillion's YouTube channel here