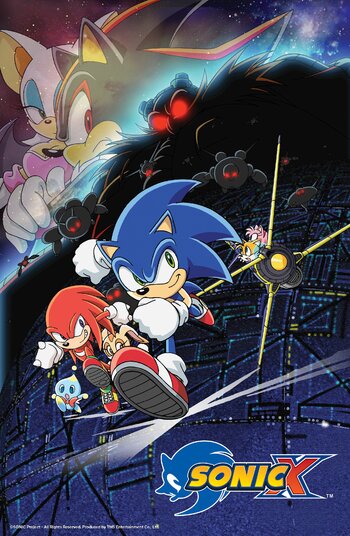 S-O-N-I-C, GO!
"The Smart, Speedy and Stylish!"
— Tagline for the promotional of the sub in Japan
"Gotta go fast!"
— Opening of the 4Kids dub in the US
Advertisement:

Sonic X is an anime based on the Sonic the Hedgehog video game series, mainly the Sonic Adventure series. Produced by TMS Entertainment, it is the first non-American Sonic animated series to have made it past the first two episodes* We're looking at you, Sonic the Hedgehog: The Movie.. It is also the spin-off series closest to the game canon.

The series' first two seasons focus on Sonic and friends being transported to Earth, where they meet and befriend a boy named Chris. The second season mostly focuses on the re-tellings of Sonic Adventure, Sonic Adventure 2, and Sonic Battle, except with a few new human characters involved in the stories. The third season is Darker and Edgier and involves Sonic's crew trying to save the universe from the evil Metarex.

The series adapted into a 40 issue American comic book by Archie Comics, set somewhere before the end of the second season. Chronicling the further adventures of Sonic and friends, and introduces the shadowy anti-Sonic organization; The Society for Observing and Neutralizing Interdimensional Creatures and Xenomorphs.

Dubbed and subbed versions are available

on Hulu, but only for those in the U.S., and the entire series is also available dubbed on TMS's official YouTube channel

. Discotek Media has released the entire series on DVD, though currently only the dubbed version.

Thinking that Sonic is a machine, Chuck Thorndyke, Chris's grandfather, tries to dismantle him with a screwdriver. This unintentionally tickles Sonic.

Thinking that Sonic is a machine, Chuck Thorndyke, Chris's grandfather, tries to dismantle him with a screwdriver. This unintentionally tickles Sonic.