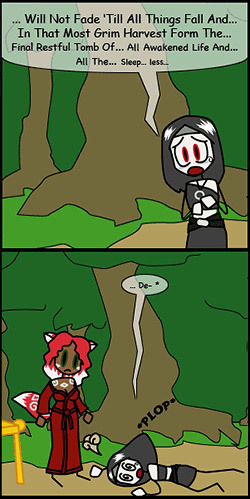 For whatever reason, victims of poison always seem to have some big speech to give while the poison kicks in. The poor sucker will stumble around, lose his train of thought, start sweating heavily, sway a little—maybe take a few slugs from the (poisoned!) water bottle. The crowd, without fail, will suddenly become blurry and indistinct.

A common variant has the victim simply having a heart attack, fainting, or falling ill without poison.

Killed Mid-Sentence would also apply if the speaker dies, instead of just being knocked out.

Also note Almost Dead Guy and His Name Is....

Rule of Drama - collapsing in public is a pretty spectacular way to go.

open/close all folders
Anime and Manga
Comics
Fan Works
Advertisement:
Film
Literature
One could imagine that the old abbot's last sermon was in fact a confused mixture of various religious passages he remembered. It needed the commentary of the Chief Abbot to make sense. I presume he chose some mystic terms from the abbot's sermon, and made those the theme for a lucid discussion.
Live Action Television
Podcast
Theater
Web Comics
Western Animation
Real Life