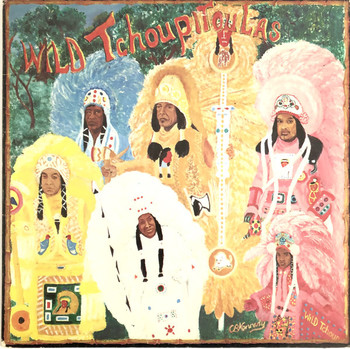 (sometimes known as the Afro New Orleanian Tribes or Black Indians) are Afro-American social clubs that take on the names of fictitious Indian tribes. They each have their own special expressions, rituals, and costumes influenced by Native American dress and culture and today there are over 30 "tribes" which play and perform to this day. In 1976, a record would come out that brought the music of the Mardi Gras Indians to a wider audience.

The Wild Tchoupitoulas is an album by a Mardi Gras Indian tribe of the same name, whose name was itself fabled to be the name of a lost Indigenous tribe meaning "those who live at the river". Headed by George "Big Chief Jolly" Landry and notably produced by famed producer and songwriter Allen Toussaint, it would exemplify the traditional music of the Mardi Gras Indians, itself being a cross-pollination of New Orleans R&B, jazz, funk and the call-and-response style chants associated with Mardi Gras Indians. The songs themselves would be a mix of traditional songs from Mardi Gras Indian processions ("Indian Red") and original tracks written by the backing band ("Hey Pocky-a-Way", "Brother John"). Whom of which was made up of funk band and session musicians, the Meters and Landry's nephews Art (who was also an original member of the Meters), Charles, Cyril and Aaron, who would later make up the funk band the Neville Brothers, inspired to continue playing and performing by there time as apart of the group.

While it was their sole record and not much of a financial success, it would receive much critical acclaim and later be included in the Library of Congress' National Registry, as a designation of "cultural, artistic and historic importance to the nation's aural legacy".

Tropes of the Nation