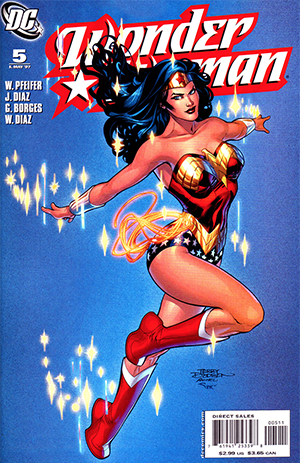 The third volume of Wonder Woman after Infinite Crisis that ran from 2006 to 2010. The book initially had very rapid writer turn over before settling on Gail Simone. The quickly changing writers and the requirement for several of them to tie into the Amazons Attack! crossover led to several inconsistencies and dropped plotlines. The writers on Volume 3 are:

Heinberg's run makes use of the following tropes:

Jodi Picoult's first attempt at applying her writing chops to a comic book superhero, it was overshadowed by the fan despised Amazons Attack! crossover event which most of her issues were part of. For more on that storyline see the related page.

An Amazons Attack! tie in, the tropes for which can be seen on the corresponding page. In Torres' run Diana gets manhandled and ordered around by Superman and Batman and is completely ok with it as she apparently can't think for herself. All three of them for some reason prioritize Nemesis' life over the lives of everyone else in the United States.

I did this to save our people, Diana! I have made terrible choices. I never wanted to be queen. I just wanted...I just wanted things to never change. Your beautiful mother, and my Circle to watch over her until the end of time!

Ends of the Earth

Rise of the Olympian

A Murder of Crows

Wrath of the Silver Serpent