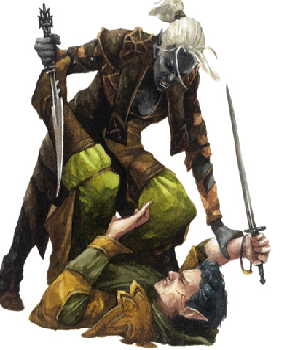 Two races, one Always Lawful Good and one Always Chaotic Evil, which are specifically counterparts of each other. Essentially an Evil Counterpart on a species wide scale, and related to Cain and Abel and other sibling rivalry tropes.

While Elves vs. Dwarves is about Harmony Versus Discipline, this is about good and evil, at least from the elves' point of view. Often subverted by a Defector from Decadence or deconstructed when it's discovered that the 'good' race is not so harmless, or the evil one has a case of My Species Doth Protest Too Much (or is merely dark and not evil).