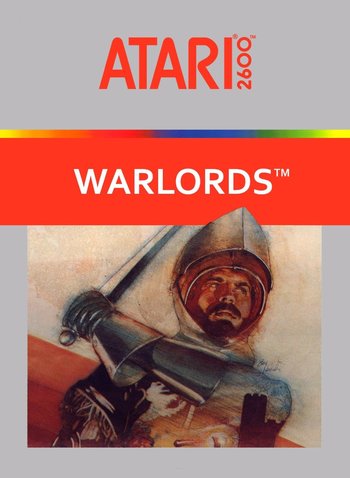 Warlords is a 1980 video game. The players control a spinner controller to use shields to defend their castle walls from the fireballs that ricochet around the playfield. Players can capture and catapult the fireballs at opposing castles. Fireballs destroy pieces of the castle walls they hit. Essentially, it's four-player Breakout, where you're trying to break through your opponents' walls while protecting yours.

The objective of the game is to destroy the three other castles while protecting one's own castle with the moving shield. When the button is depressed, the shield can capture a fireball. Release the button and the fireball is catapulted at the opponents. The spinning fireballs released from a shield have more destructive force on a castle wall than a fireball simply deflected from another wall or the sides of the playfield. Fireballs cannot be held long since they slowly destroy the player's own castle walls adjacent to the fireball. Additional fireballs appear at predetermined intervals or when a castle is destroyed, whichever comes first. A maximum of four fireballs can simultaneously be in play.

The computer controls all the unpaid castles. In one- and two-player games, if a paid player has the surviving castle, the game continues with a new battle at a higher level. In the higher levels, computer opponents play more accurately and faster. Two-player games can be played jointly (to maximize score/level) or competitively.

WARNING: This game gets extremely competitive. Surprisingly so for a game that's Older Than the NES, which explains why it was released for Xbox Live Arcade twice.

Not to be confused with the Warlords series of turn-based strategy games for the PC, made from 1989 to 2003.

Warlords has examples of: