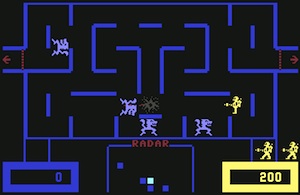 A 1980 Maze Game by Midway in which one or two players, as Worriors equipped with unified-field-disturbance rifles, descend into the dungeons of the Wizard and slay Worlings. A radar screen lets players track the movement of Invisible Monsters. The difficulty increases when corridors and short passages give way to the more open layouts of the Arena, the Worlord Dungeons, and finally the Pit.

The arcade version featured a computer-controlled ally for single players; it was also one of the earliest arcade games to feature synthesized speech, with 71 phrases for the Wizard to taunt players with. The game was ported to various computers and consoles, including a version for the Bally Astrocade renamed The Incredible Wizard.