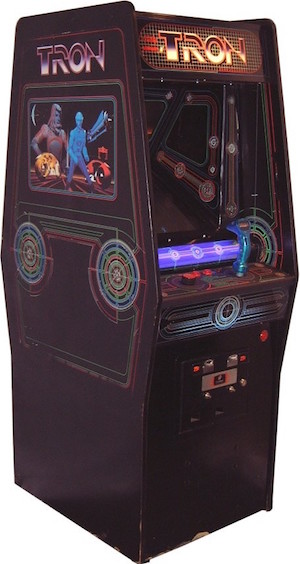 TRON is a 1982 arcade game based on Disney's film of the same name that was developed by Bally/Midway.

It consists of four different games that must be played in any order to complete each level: Tanks, Light Cycles, I/O Tower, and MCP. One of the machine's interesting features is a glowing blue joystick which is used along with a spinner controller in playing the game, to make the player feel like he's entering the awesome world of the movie. It also features digital recreations of some of Wendy Carlos' music from the movie's soundtrack.

It appears in TRON 2.0 and TRON: Legacy as part of their stories' Recursive Canon.

It is currently available through Xbox Live Arcade by Disney Interactive Studios. A Flash version called Classic TRON is also available at the Disney Games website.