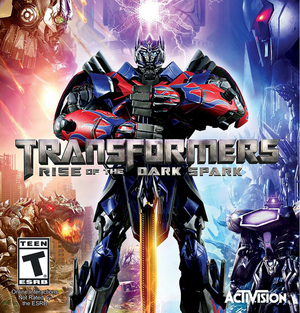 Two worlds collide.
"For every force in the universe, there is an equal and an opposite. For every hero, a villain. And for every victory, defeat."
— Optimus Prime, The Reveal Trailer
Advertisement:

Taking place during the film Age of Extinction and partially serving as an interquel to the Cybertron games section of the Aligned Universe (taking place between War for Cybertron and the Fall of Cybertron), the characters on Earth and Cybertron are fighting over the titular MacGuffin: the Dark Spark, whose power can bend space and time to the bearer's will.

The game begins with a purple comet approaching Earth, and Decepticon mercenaries are on the attack under the leadership of Lockdown. It's up to Optimus Prime to rally the few remaining Autobots into quelling the invasion.

The video game is available for the Wii U, PlayStation 4, Xbox One, and Nintendo 3DS. The console versions are cast in the same third-person shooter mechanic as Fall of Cybertron, while the 3DS version utilizes an tactical role-playing game format where melee combat is more prevalent.