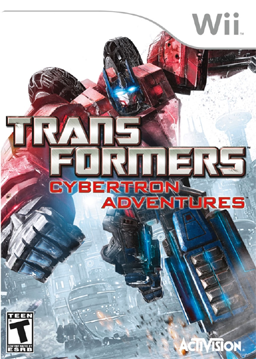 A video game that's based off of Transformers: War for Cybertron and is exclusive for the Nintendo Wii. Rather than using a third-person shooter mechanic, Cybertron Adventures is a Rail Shooter in robot mode and uses a "power-up" system that improves the power and ammunition capacity as long as the player is constantly killing the various enemies.
Advertisement:

The story revolves around Megatron using a Kill Sat named Trypticon to bombard Cybertron from the relative safety of orbit while his ground forces maintain their assault on Autobot territory. Meanwhile, the Autobots are busy evacuating their homeworld to escape Megatron's wrath, and seeking a way to weaken and neutralize Trypticon.

Skywarp: You shut your mouth Starscream or I'll silence you permanently!