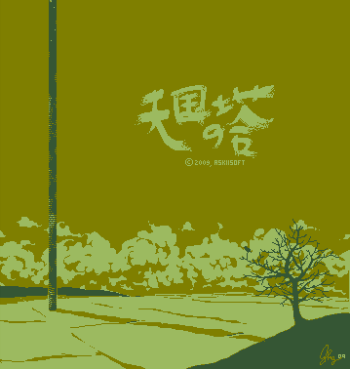 May heaven grant you fortune.
I saw the traveler make his way toward the monolith,
That thin gash amidst the clouds;
An open seam between heaven and earth that eluded the Eye of God.
Or perhaps it had not; perhaps it beckoned from one realm
To the other, wedded And ruled as one;
For look how clean it splits the horizon 'twain, absorbs it,
Makes it Strange,
An indomitable beam,
A tower of heaven.
— Journal of an unknown traveller
Advertisement:

An indie platforming game made in 2009 by askiisoft. Also known as 天国の塔 (Tengoku no Tou, same meaning).

In this game, you play as a humanoid creature who attempts to scale a gigantic tower against the wishes of the tower's resident god. Said deity attempts to put an end to your progress by enforcing certain laws, such as "Thou shalt not walk left" or "Thou shalt not touch yellow blocks." The player must not only time their jumps and navigate platforms of varying difficulty, but must ensure that they adhere to the laws brought forth by the deity.

. A Flash port of the game with a few extra features, including a Level Editor, can also be found on Newgrounds here

It later received a sequel/Spiritual Successor, Pause Ahead.