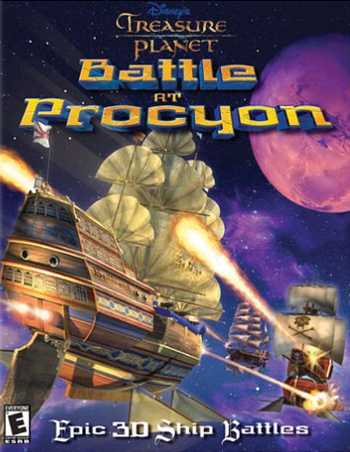 Pirate spotted, Sir!
It is the golden age of exploration, solar-powered light ships fly the Etherium of deep space, bringing colonists and trade to every corner of the galaxy. But even a golden age has its dangers, some natural and some decidedly less so. Where there are traders there are also pirates, always ready to prey on the unwary. Within the Empire, such crimes do not go unpunished, those who would disturb the peace must face the Royal Navy, the Queen's Royal light ships have protected the Empire for over two centuries. Whether fighting pirates or Procyon invaders, the Navy has always been victorious, until now. Just as the Empire and the Procyons are on the verge of peace, a new menace has appeared on the frontier, a menace that cloaks itself in mystery, and leaves no clue, except destruction. A menace, that may be too powerful for anyone to defeat.
— Introduction
Advertisement:

Treasure Planet: Battle at Procyon is a Naval Combat game and sequel to Disney's Treasure Planet film. It was released on October 31, 2002.

The game takes place 5 years after the events of the aforementioned film. An Older and Wiser Jim Hawkins is about to graduate from the Royal Navy Academy as a Naval Officer in the Terran Empire's Royal Navy after completing one final exam, which is being invigilated by Amelia, who has been promoted to the rank of Admiral. While all this is happening the Terran Empire and the Procyon Expanse are negotiating a peace treaty after 10 years of war, as part of a 75 year old conflict. While this is happening, several ships have been disappearing and strange, highly advanced ships with steel armour and no sails (all the other ships in the game are made of wood and powered by solar sails) have been sighted, these mysterious ships are known as 'Ironclads'.

The player can set navigation courses, fire the weapons, grapple and tow ships, and board enemy ships. In addition to the main ship, which the player has full control over, the player sometimes has other AI controlled ships in their fleet they can give orders to; successfully boarding an enemy ship will add it to the player's fleet. Ships can be customised, such as modifying the weapon banks or choosing the crew. Weapon banks are sorted into 4 categories, light, medium, heavy and special, customisable weapon banks allow weapons to be swapped as long as they are the same weight or lighter, although special weapons cannot be swapped.

The campaign consists of 12 missions, and follows the story of Jim Hawkins' career as an officer in the Terran Empire's Royal Navy, fighting the Pirates and investigating the Ironclad menace while the peace agreement between the Empire and the Procyons is underway. During the campaign, Jim Hawkins is supported by his first mate, Mr. Onyx.

In addition to the campaign, the game also has a 'skirmish' mode, which allows the player to play as either the Royal Navy, Pirates, Procyons or Ironclads in either 'historical' or 'open maps. 'Historical' maps take place either during the Terran-Procyon War, or recount various Pirate raids or Ironclad sightings. These maps do not allow the player to customise the fleet, but they do allow the player to play as any side. 'Open' maps allow much greater freedom in customising the scenario, as the player is allowed to choose what ships are in their fleet, as well as how many 'players' participate in the scenario.

Battle at Procyon provides examples of: