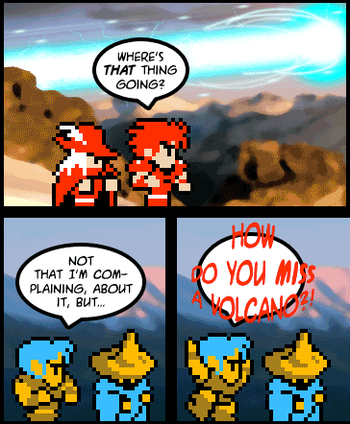 It ends up causing mass extinction on the next planet.
"The Gauss Rifle can kill an enemy before he even knows he's dead, landing a hit however may prove difficult."
— Description of the Gauss Rifle, Raze 3

Sometimes a character has a ranged attack that's really powerful. Maybe it can destroy a planet, One-Hit Kill Physical Gods, or perhaps it can blast apart things Made of Indestructium. If it hits squarely, whatever is on the receiving end is screwed, Healing Factor, Super Toughness, ferrous composition, or Nigh-Invulnerability be darned.

Clearly there has to be some drawback to prevent this attack from breaking Competitive Balance, so often the creator will balance it by making it significantly less accurate than the other options. Whenever someone uses it, they're taking a chance that they will destroy their target if it hits, but also a high risk that it will miss and do little or no damage. Even users with Improbable Aiming Skills won't necessarily be able to make it more precise because it's not the attacker's aiming skills at fault, it's a flaw of the weapon or attack itself that it wants to go in a different direction than the user wants it to.

When an attack or weapon is powerful but inaccurate, it's this trope. Often Awesome, but Impractical if a weaker but more-accurate attack will statistically do more damage in the long run. If it's the fault of the user wielding the weapon/attacker, check out Imperial Storm Trooper Marksmanship Academy, where the bad guys may have accurate weapons but they're just bad shots, or A-Team Firing, which is when everyone and not just the bad guys are graduates of the academy. Short-Range Shotgun is a case where it becomes more accurate at shorter ranges.

See also Critical Failure for chances of an ability failing to work, in general. A Sub-Trope of Necessary Drawback. Compare Difficult, but Awesome, with which this may overlap if the inaccuracy can be overcome with sufficient skill, and Fixed Forward-Facing Weapon for weapons whose accuracy is largely dependent on whatever they are mounted on. Contrast Always Accurate Attack, which is often weak to compensate.

Do not confuse with Powerful, but Incompetent.