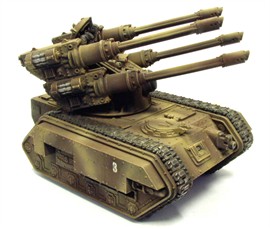 All together now: dakka dakka dakka dakka!
"We don't fly and we're not letting anyone else, either!"
— Unofficial motto of Russian anti-air corps
Advertisement:

Fighting against flying enemies is a pain when your own two feet are on the ground. Either your enemies can swoop down at you swiftly or stay high enough that your attacks cannot reach them.

For this situation, you need Anti Air: an attack, weapon, munition, ability, etc. that is effective against flying enemies. Alternatively, it can be something that brings the flying enemy down to ground and prevents them from flying again temporarily.

Works with flying monsters bring Anti Air to the fore. There's nothing like a dragon overhead to start a craze for archery. Effective Anti Air attacks are great for dramatic reversals of fortune in a story, with a flying enemy brought figuratively and literally low.

In video games, one common way to add tactical depth and Competitive Balance is to make AA units excel against flyers, but fail against everything else — what we call Crippling Overspecialization. They usually form part of a Tactical Rock–Paper–Scissors game mechanic. For example, AA is great vs aircraft, aircraft are great vs troops, troops are great vs AA. Any unit not specifically devoted to the role will be unable to touch airborne enemies.

Alternatively in video games, they can serve as objectives in setting up, manning, or destroying to further the plot, whether it is to negate or regain air superiority.

More generally, works set around WWII have given us a legacy of visual tropes: a sweating crew frantically traversing a multi-barrel anti-aircraft gun, the rapid pounding of the barrels, the terrifyingly fast blur of strafing aircraft. In works set from the pilot's point of view we have the sinister black puffs of flak and tracer fire appearing in the air all around them. This is pretty much a given during a bombing run, where the pilot is unable to try and evade the incoming fire, having no choice but to fly straight into the teeth of the defenders lest he throw off the aim of his own attack.

Specific anti-aircraft weapons are deployed in Real Life. However, units with mixed roles are more common than in games. For example, most warships have some sort of AA as well as their main weapons, or their AA missiles ''are'' their main weapons.

Sub-Trope of Weapon of X-Slaying. Compare Shoryuken for fictional martial-arts moves designed to counter an airborne opponent, as well as Anti-Cavalry, Anti-Infantry, Anti-Vehicle, Anti-Structure and Anti-Armor.

Example of:
Trading Bars for Stripes