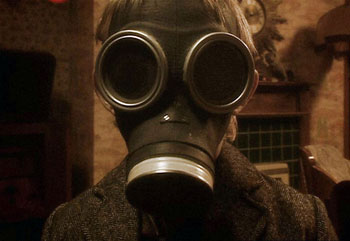 "Are you my mummy?"
Dr. Constantine: Before this war began, I was a father and a grandfather. Now I'm neither, but I'm still a doctor.
The Doctor: Yeah. I know the feeling.
Advertisement:

The one where we meet the all-loving Lothario.

This two-part episode is the first story Steven Moffat wrote for the revived Doctor Who. In what would become a continuing theme for Steven Moffat, it's very scary, contains tons of Unresolved Sexual Tension, and instantly won a Hugo Award.

It introduces Captain Jack Harkness, who becomes a tremendously important character throughout the next few seasons and gets his own spinoff, Torchwood.

Sixth Doctor Colin Baker has said that in his opinion, this episode (and its second part, "The Doctor Dances") is the best Who story ever filmed. This becomes even more notable when you realize that elements of this story (notably the creepy child in pursuit of his lost parent) share similarities with the Big Finish audio drama "The Holy Terror" — a story that writer Steven Moffat called his favorite Sixth Doctor story, ever.

The Doctor and Rose follow an alien spacecraft's emergency signal through time and space, to London during the Blitz. Since they can't very well leave alien stuff lying around in the past, they decide to retrieve it.

Things quickly get weird, though: the phone on the outside of the TARDIS rings, despite not being a real phone and not being hooked up to anything; a mysterious young woman appears and warns the Doctor not to answer it; when he does, it's a plaintive child's voice asking "Are you my mummy?"

Rose, in the fine old tradition of the Doctor's companions, has wandered off and got herself into trouble. In this case by grabbing a hold of a barrage balloon and accidentally taking to the skies above London while it's being bombed, wearing a T-shirt with a giant British flag on it. She's rescued in the nick of time by a suave spaceship pilot with an American accent, an RAF uniform and a penchant for flirting with his fellow soldiers, who introduces himself as Captain Jack Harkness. Captain Jack deduces that she's also a time traveller and, assuming that she's a Time Agent, tells her of a recently crashed alien ship, whose location he'll reveal for a few quid. Oh, and he (quite successfully) tries to seduce her — by taking her for a slow dance on the roof of his invisible ship, which is anchored to the top of Big Ben.

Elsewhere in London. Nancy, the young woman who warned the Doctor not to answer the phone, sneaks into a house whose inhabitants are in their bomb shelter. They've left the house mid-meal, so Nancy gives a signal and adorable little waifs come rushing in. They're mostly homeless kids and/or escapees from the Blitz Evacuation. Oh, and one extra person — adorable, all right, but unusually tall and deep-voiced, for a kid... it's the Doctor! He fishes for information but doesn't get very far. Then Nancy and the kids hear the approach of a certain kid in a certain gas mask, repeating a certain catch phrase, and flee in terror. Nancy identifies the boy as her brother, Jamie, and claims that he's "empty". The Doctor is left behind to see the kid up close — including a cut on the kid's hand — and is asked over and over, "Are you my mummy?"

Nancy, once tracked down, points the Doctor to "the Doctor". She means Dr. Constantine over at Albion Hospital, who treated Jamie when he first got hit by a mysterious falling object that wasn't a bomb.

Dr. Constantine is there, all right, along with a lot of apparently dead people wearing gas masks and bearing cuts on their hands, and they all got that way by touching Jamie or touching someone who'd touched him. And... they're still alive. Also, the gas masks are made of flesh and bone. As Dr. Constantine finishes mutating into a gas-mask-person, Rose and Jack arrive, in time for the patients to all rise up from their beds and close in on our heroes...