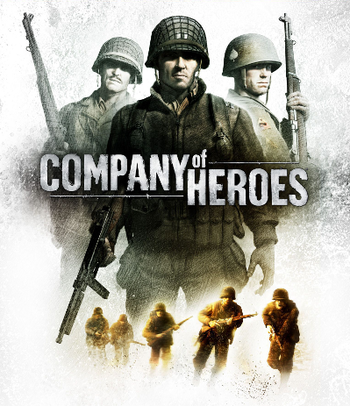 Division of Heroes would imply too large of a group, and just doesn't have the same ring to it.
Company of Heroes is a Real-Time Strategy PC game set on the Western Front of World War II. It was created by Relic Entertainment, the developers of the Dawn of War series. Relic's next generation engine, dubbed Essence, was introduced with this game, succeeding the aging Impossible Creatures Engine used by Dawn of War. It was ported to the Apple Macintosh in May 2013 as Company of Heroes Complete: Campaign Edition, which includes every campaign from the original and expansions, as well as skirmishes against the AI.
Advertisement:

The campaign follows both Able Company, part of the 29th Infantry Division and Fox Company, part of the 101st Airborne Divisionnote  Which specific regiment each company is part of is not mentioned, as a division is made up of multiple regiments, each of which includes an “A” Company (and B through at least I) plus any independent (i.e. not a component of a regiment/brigade) battalions. All of them would be called “Able Company” based on the phonetic alphabet in use at the time through the Invasion of Normandy, from the D-Day landings to the closing of the Falaise Pocket. The Band of Brothers TV series has been a major inspiration for the game, even the title comes from a line in the last episode and the last line in the book.

The gameplay builds heavily on Dawn of War's formula (so much so that many consider it the WWII version), focusing on map control and infantry combat. New elements include a third resource, Munitions, that is spent on using special abilities (such as throwing a grenade or calling in an airstrike), instead of the more common Mana Meter. The map is still filled with capturable strategic points, that now control the sector around them. This territory counts as "home terrain" for the owner of the point, which affects several game mechanics. To gain resources, players must capture strategic sectors then ensure a contiguous chain of sectors that leads back to their headquarters. Players can choose one of three specializations for their army, giving them a set of unique units and abilities to unlock with experience points.

A stand-alone expansion called Opposing Fronts was released in September 2007. It features two new armies (The British Commonwealth and the "Panzer Elite"), each with their own campaign, focusing on the Liberation of Caen by the British 2nd Army and Kampfgruppe Lehr's defense of the bridges targeted by Operation Market Garden respectively.

A second expansion, Tales of Valor, mixes up the formula. Rather than adding new sides, the expansion adds new play variations for campaign and multiplayer, most based on controlling one or a few powerful units instead of an army of weaker ones. The multiplayer variations are described in their own section below. The campaigns are "Tiger Ace", which covers a fictionalized version of the Battle of Villers-Bocage from the perspective of the titular Tiger Ace, "Causeway", where several squads from the 82nd Airborne attempt to secure the La Fiere Causeway, and "Falaise Pocket", where the German defenders must delay the Allies from closing the Pocket for as long as possible.

A sequel named Company of Heroes 2 was released on June 25, 2013. Set on the Eastern Front from 1941 onwards, the player takes command of either the Red Army or the Wehrmacht in the midst of Operation Barbarossa, a full scale invasion of the Soviet Union. It received extremely negative reactions from many Russians (The reasons are summed up in this video

), to the point that the Russian publisher ceased its distribution.

In the campaign, you follow the wartime experiences of Soviet officer-turned-war correspondent Lev Abramovich Isakovich, who, several years after the end of the war, is languishing in a Siberian labor camp for the contents of his journal, which negatively portray and question the actions of the Soviet Union during the war. Under interrogation by NKVD Colonel Churkin, his former commanding officer, he relives those dark and trying times...

There is also a separate, continuously updated campaign called Theater of War, which covers various battles from all over the Eastern Front that aren't covered in the main campaign. It features co-op scenarios (playable with either other players or an AI partner), solo challenges focusing on certain tactics and strategies, and set-piece battles against the AI. Initially, only the 1941 scenarios are available, with battles from later on available as DLC.

The game uses the newer Essence 3.0 engine, touted as having increased graphical fidelity and new environmental destruction. The infamous "General Winter" plays a huge role, requiring you to monitor your units' temperature and ensure they don't freeze to death. Players can customize their armies with cosmetic skins for vehicles and up to 3 Intelligence Bulletins that provide bonuses to certain unit types. Commanders replace the first game's Doctrines (with its parts being unlocked with subsequent command points received in your total pool instead of being bought with them) and fulfill the same role, though the player can now choose which Commanders they want to bring to battle. Many are unlocked by reaching a certain level with others being sold as DLC, and most Intelligence Bulletins also require the player to complete certain criteria, like using specific abilities a set amount of times or killing certain unit types using another unit type. Further details can be found here

The UI was changed, most noticeably allowing all units to be selected from a list on the top-right, as well as displaying their status, and a more intuitive hotkey set using the buttons Q, T, Z and B and those between them. Tech trees were streamlined, with significantly less global upgrades being available for both sides in the game. Points became small areas that capturing units could stand or move around in to take or contest the point instead of being forced to stand right next to it to do so. Weapon crews became significantly more distinct and asymmetrical. Smoke was changed to uniformly block line of sight. Veterancy was changed to be earned by both sides in combat, with units first obtaining an ability from their first veterancy rank and then usually getting passive statistical bonuses for subsequent ranks - in addition to killing units, veterancy experience can be earned from doing and taking damage, with less from the latter. Planes called in from commander abilities may stick around longer than in the first game and provide sight while they fly by, but this further risks them being shot down by anti-air methods. Later patching to the game also enhanced the necessity of cover and positioning to infantry combat by increasing the lethality of the game's small arms, and added a new system for penetrating vehicle armor, with most rounds being less effective at penetrating armor as they travel to varying degrees depending on the gun.

A standalone multiplayer expansion for 2 titled The Western Front Armies was released on June 23, 2014, harking back to the original game's setting with the US Forces and Oberkommando West armies. The US Forces emphasize mobility and versatility, with infantry weapon upgrades being available at base to be bought and picked up for all non-weapon team infantry and vehicle crews may disembark from their vehicles to capture territory, repair their vehicle, run for their lives should their vehicle risk being destroyed or, quite rarely, fight on foot - the US Forces' appropriate drawback is a lack of durable tanks (even the faction's one "heavy" tank available from a commander is noticeably more squishy than all the other factions'). The Oberkommando West represent the last major muster of Germany's forces toward the war's end approaching and have hardened and elite infantry at their command backed by similarly rare and advanced support weapons, vehicles and other equipment, and their units are able to gain two additional ranks in veterancy. Their base buildings' equivalents are supply trucks that may be set down (permanently) closer to the front to provide different kinds of aid. They lack the ability to build relevant buildings to boost their resource gain on territory, and so instead must rely on scavenging fuel from abandoned heavy weapons and vehicles.

A standalone singleplayer expansion for 2 named Ardennes Assault was released on November 18, 2014. Set in the Battle of the Bulge with 18 singleplayer scenarios, players will choose one of three unique companies and their options to carry on through the campaign, managing persistent company strength (casualties reduce it, and reinforcing the company costs it some veterancy) and upgrades throughout it with their choices having a permanent impact on future missions and the campaign's story.

Yet another standalone multiplayer expansion pack for 2 was announced on July 9th, 2015. Simply titled The British Forces, which marks the return of (who else) the British Commonwealth.

On July 13, 2021, the third main game of the series, Company of Heroes 3, was announced, featuring a turn based campaign with real time battles, similar to Total War. It will focus on the American, British, and German forces in the Mediterranean (North African and Italian) campaigns.

Tales of Valor brings in three new gameplay modes, including: