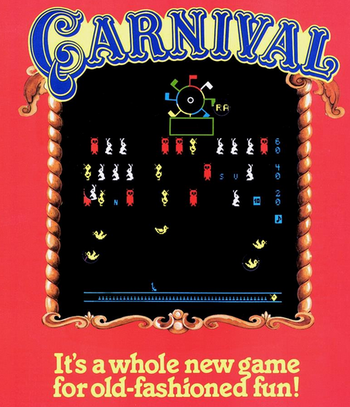 Carnival is a 1980 fixed shooter arcade game by Sega, which was ported by Coleco to the Atari 2600, the ColecoVision, and the Intellivision. The game replicates a shooting gallery in which you must use your gun to shoot at all the targets on the screen that appear in three rows, plus the pipes on the spinning wheel at the top, while making sure you don't run out of bullets. To complicate matters, one of the ducks on the bottom row may start flying to the bottom of the screen and chomp away at ten of your bullets if you don't finish him off fast enough!
Advertisement:

was produced and put into test locations in Southern California, but was never officially released (though a ROM does exist and the game has been preserved that way). It consists of three stages rather than the original two, and you have five lives instead of limited bullets. The first stage closely resembles a graphical update of the original game, except you're shooting moving cans off of a fence (with bottles that spell out BONUS and ducks that try to eat your gun) and have to juggle them to make them land on a higher platform, while the other two are completely new (though the third is loosely based on Carnival's bear-shooting bonus game).