Film / Enemy at the Gates 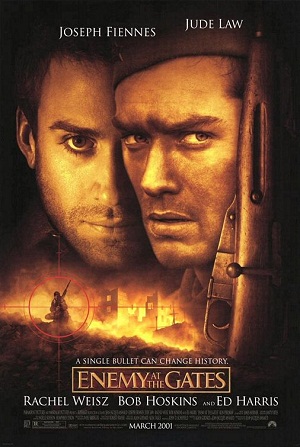 Danilov: Do you know how to shoot?
Zaytsev: A little.
Advertisement:

Enemy at the Gates (also known as Stalingrad: Enemy at the Gates) is a 2001 war movie directed by Jean-Jacques Annaud and starring Jude Law as a Russian sniper in the Soviet Red Army in the Great Patriotic War, during the battle of Stalingrad. At the time it came out it was the most expensive film ever produced by a European studio. It's Very Loosely Based on a True Story, that of the real-life sniper Vasily Zaytsev

, with the basic plot based off a subplot in the non-fiction book Enemy at the Gates: The Battle for Stalingrad.

In the movie, Zaytsev (Law) is a young, slightly naive shepherd from the Urals press-ganged into serving in the Battle of Stalingrad during the German invasion of the Soviet Union in 1942. He barely manages to survive a futile charge at the German positions and encounters a political commissar, Danilov (Joseph Fiennes), who witnesses him expertly take out five enemy officers single-handedly with just an abandoned rifle and five bullets. Impressed by the young man's gifted marksmanship, Danilov has him reassigned to the sniper division and uses his propaganda connections to spread the story of his exploits, turning him into a hero and restoring the broken morale of the Soviet defenders. Unfortunately, the friendship between the two becomes strained when both fall in love with Tania (Rachel Weisz), a female private in the Stalingrad militia, and when the Germans, themselves now increasingly demoralized thanks to the stories of Zaytsev's exploits, introduce the cold, ruthless Major König (Ed Harris) into the battle. Himself a brilliant sniper, König has only one order — kill Vasily Zaytsev.

See also the 1993 German film Stalingrad and the 2013 Russian made Stalingrad for other points of view on the battle.