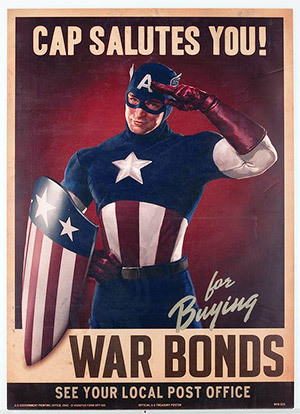 "This is the West, sir. When the legend becomes fact...print the legend."
— Maxwell Scott, The Man Who Shot Liberty Valance
Advertisement:

The people need a hero. The war is not going well, and the troops are running out of food, ammo, and steam. The propaganda department is about to fall on its collective sword when in walks a vision: a square-jawed, broad-shouldered, clear-eyed, clean-limbed HERO...to deliver the mail. A hero who is the personification of everything good, true, and pure of the nation, who you can follow into battle and inspire you to fight and die for a cause. Immediately, he is snatched up, given a shave, a haircut, a heroic backstory and put on display. His story might even be true, but that's less important to the Powers That Be than his effect on morale. And even if it is true, it will exaggerate out of proportion, misinterpreting small-scale motives for grand ideology.

Inevitably, our Made Hero will grow into his legend, and eventually even exceed it. On the other hand, if the hero was truly a hero, he will at times express reluctance about his image being used against his intentions and actions, feel guilty about how his actions divert attention from The Real Heroes, and likewise struggle to repress those parts of his life and past that would otherwise fracture the myth. However, the image of the hero takes a life on its own and too many people and organizations are invested in that propaganda for a little matter of personal feelings to get in the way.

Propaganda Hero often arises deliberately, but sometimes it can come up spontaneously with no real grand plan or scheme. It is rooted in both folklore and cultural tradition as well as the engine of political machines, or simply the logic of commercialization and sales. Everybody wants something to believe in, and usually they turn to leaders in Church and State, but when those leaders cannot, for various reasons, suffice as sufficiently inspirational, they or their court scribes have to create something out of nothing, or the people have to resort to their own mythmaking prowess to seek guidance when Church and State authorities are mum.

Related to Famed In-Story, Shrouded in Myth, Historical Hero Upgrade, Propaganda Machine, Captain Patriotic, Engineered Heroics, and Self-Made Myth. See also Cult of Personality, where the leaders of state are made into heroes or gods, either by themselves or their party after the leader's death, and Fake Ultimate Hero, where everything about the character turns out to be a lie.