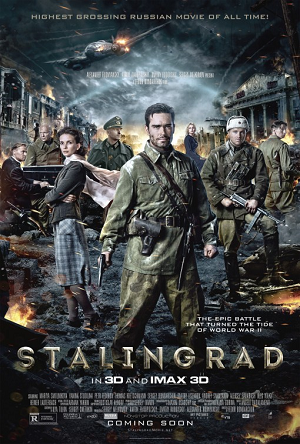 Stalingrad is a 2013 Russian war film directed by Fedor Bondarchuk, set in the fall of 1942 during the famous World War II battle of Stalingrad.

Five Russian soldiers (Capt. Gromov, Chavanov, Nikiforov, Polyakov, and Sergey Astakhov) are dug into a blasted-out apartment building in the heart of Stalingrad, which they are defending from repeated assaults by a German unit led by Hauptmann Kahn (Thomas Kretschmann). The apartment building is home to Katya, a young Russian maiden who simply refuses to leave her apartment. Hauptmann Kahn, for that matter, has a Russian girlfriend named Masha who he is keeping in the bombed-out basement that he uses as a headquarters.

Stalingrad received mixed reviews from critics but was Russia's most popular film of 2013. One of a dozen films in which Thomas Kretschmann played a World War II German soldier, including a 1993 German production with the same title as this film. For a Western-made Soviet POV film on the battle, see Enemy at the Gates (which is also titled Stalingrad in some countries).