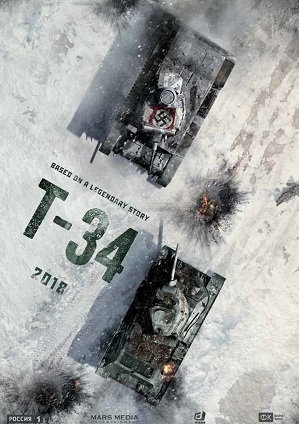 T-34 is a 2018 Russian war movie directed by Aleksey Sidorov.

In the months following the opening stages of the German invasion of the Soviet Union, a lone T-34-76 crew lead by junior tank commander Nikolay Ivushkin (Alexander Petrov) is assigned to a small detachment of Soviet infantry to slow the German onslaught at the outskirts of Moscow. Finding themselves outnumbered and outgunned, the Russians lay in ambush against a German Panzer battalion lead by a cunning SS officer, Klaus Jäger (Vinzenz Kiefer). In the aftermath of the vicious tank battle, Nikolay is wounded by an equally-battered Klaus and is eventually captured by the Germans.

Fast forward to late 1944, a promoted Klaus is assigned by the German High Command to produce a tank-training program to help repel the Russian advance in the East. Seeing potential in using experienced Russian tankers to help teach the enemy's tactics to their newer Panzer cadets, he finds a mugshot of a familiar face and eventually discovers Nikolay in a POW camp. Nikolay reluctantly agrees to help the German officer and is forced to assemble a crew to repair and operate a newer model of their previous tank, a T-34-85 recently captured from the front. Seeing an opportunity to escape, Nikolay hatches a daring plan with his new crew, alongside the camp's resident translator inmate, Anya Yartseva, but pulling off the prison break of a lifetime under the watchful eyes of the Nazis isn't going to be as easy as it sounds.