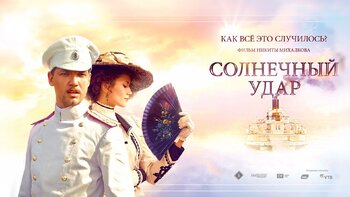 Sunstroke is a 2014 film from Russia directed by Nikita Mikhalkov.

The film plays out on two narrative tracks. The first scene shows a bunch of Russian officers in 1920, in a prisoner-of-war camp. They are from Baron Wrangel's White army, recently forced to surrender by the Bolsheviks as the Russian Civil War is coming to an end. The officers are surrendering their weapons and agreeing to give up fighting against the new Soviet state, in return for their parole and a ticket out of Russia.

Among the prisoners in the gray, muddy, sad ad how camp is an unnamed lieutenant. As the depressed soldiers sit around and wonder where it all went wrong, the lieutenant casts his mind back to 1907, and an idyllic boat ride down the Volga River. In this, the second narrative track, the lieutenant remembers a night of passion with an also unnamed woman that he met on the boat.

Based on two works by Nobel Prize-winning Russian Ivan Bunin: his short story "Sunstroke" (the 1907 storyline) and his diary of the Revolution and Civil War, Cursed Days. Eduard Artemyev composed the score.