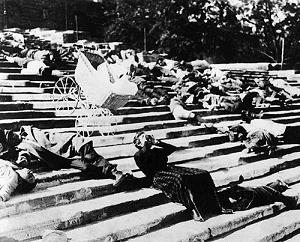 Battleship Potemkin (Rus., Броненосец « Потёмкин », Bronyenosyets "Potyomkin") is a 1925 Soviet silent film, perhaps the most famous one directed by Sergei Eisenstein, who later directed Alexander Nevsky and Ivan the Terrible. It was also his experiment to test the emotional power of montages, and history went on to prove its effectiveness.

In essence, it is a propaganda film that dramatizes the 1905 mutiny on the eponymous ship at the time of Tsarist Russia. Our brave heroes, tired of eating rotten meat, revolt against their superiors. The people of Odessa join them in launching a peaceful protest, which quickly turns violent.

Its best known sequence is one where a Baby Carriage rolls down the Odessa steps. It has been homaged and parodied numerous times since then.

Although most of the events in the movie are Based on a Great Big Lie, the film itself is considered a masterpiece of direction and cinematography, and is often ranked among the greatest films of all time. The "Odessa Steps" sequence has become one of the most famous Stock Shout Outs of all time.

A baby carriage rolls down the Odessa steps

A baby carriage rolls down the Odessa steps