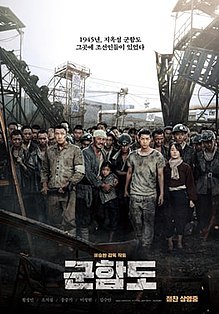 The Battleship Island is a 2017 South Korean film directed by Ryoo Seung-wan. It is set during the last days of World War II.

A large number of Koreans are either drafted or conned by the Japanese into working on the small mining island of Hashima, under appalling conditions.

Lee Kang-ok is a musician who planned to travel to Japan with his daughter. He ends up doing his best to please the Japanese in order to protect her. Park Moo-young is a member of the Korean independence movement who infiltrates the island in order to rescue an older man being held captive there. Choi Chil-sung is a violent man who seems to be from a Korean mafia. Oh Mal-nyeon is a comfort woman who has already experienced terrible things with the Japanese in China.

They try to survive as they can. Meanwhile, Allied bombers are striking Japan, including Hashima island.