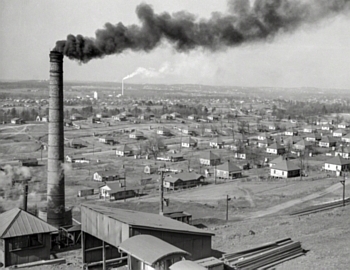 "You bought your own shovels and hammers and steels and blasting powder and lamps and boots and gloves and overalls and food from the company store for whatever price the company cared to charge. You lived in company shacks and slept in lousy company bunks and paid rent for the privilege. One way or another, every penny you earned went straight into the stockholders' pocketbooks."
— Mary Doria Russel, The Women of the Copper Country
Advertisement:

When a town is controlled by a single company, you have a company town. In Real Life these were popular in the days before automobiles allowed workers to freely commute. A company would build a town to provide local services such as libraries and general stores. The downside was that many companies price gouged

to keep their employees from leaving for a better job in a form of Indentured Servitude. Their prevalence was one of the factors that led to the formation of labor unions in the USA in the '20s and '30s, often with violent resistance from these companies and their Tyrannical Town Tycoons, who employed Pinkerton Detectives or similar to suppress labor organizing and strikes. Not all company towns were bad; some were created to provide a better standard of living and create jobs. Others exist simply because the town in question is so remote, no one else wants to move in.

The more modern version of this trope is a town with a single commercial organization that outclasses any others nearby and effectively runs the area. Smaller, independent businesses do exist, but with little to no political influence in comparison. Unlike older versions, these towns can hold protests and rallies, but will be looked down upon as inconsequential insects from those within the imposing corporate tower, if not ignored outright.

If the company has enough resources to build a town quickly, it's also a Boom Town. Should the company in question go under, the town can become a Dying Town or Ghost Town. If it's not a company, but a family running things, then it's closer to feudalism. You can expect this trope to be Recycled IN SPACE!, with Asteroid Miners taking the place of Earth Miners.

Compare with Only Shop in Town, there's usually more than one shop, but they're either in league with or owned by a single company; One Nation Under Copyright, a Mega-Corp owning a citystate or bigger; Industrial Ghetto, usually a part of larger city; I Own This Town, where one person is running things; Egopolis, a town named after the dictator who controls it; and Elaborate University High (for a collegiate version).