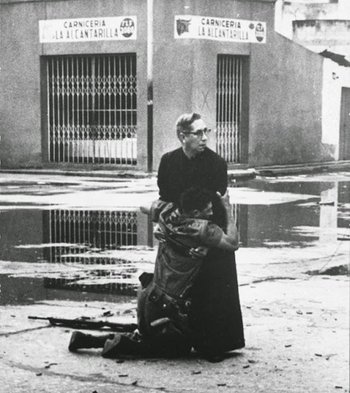 It goes without saying that the mere thought of death is a terrifying thing. While we're all going to die one day, nobody wants to go through the process of dying. After all, in fiction, it's usually slow and painful, and while you may be able to get off a Deathbed Confession or two, you'll never be able to say everything you want to say. It's worse still if you haven't lived a full life, or have one or more major regrets.

But it's not all bad. Sometimes, someone will be around to provide comfort in your last moments. In works, this character is usually a loved one of a kind, such as one of the hero's True Companions. Otherwise, it's a Nice Guy who just happens to be there, or it could even be a Pet the Dog moment for a morally ambiguous character. The important part is, this character is here, and they take the time to make the dying feel comfortable and happy before they pass.

This can result in some subtropes:

The exact opposite is Dying Alone, which is the painful alternative that makes this trope so powerful by contrast. Related and overlapping tropes are Go Out with a Smile, You Are Not Alone, Died Laughing and Died in Your Arms Tonight (a character may hold a dying person to comfort them). This may come from a moment of Delirious Misidentification.

As a Death Trope, spoilers are unmarked!

Examples (not covered in the subtropes):