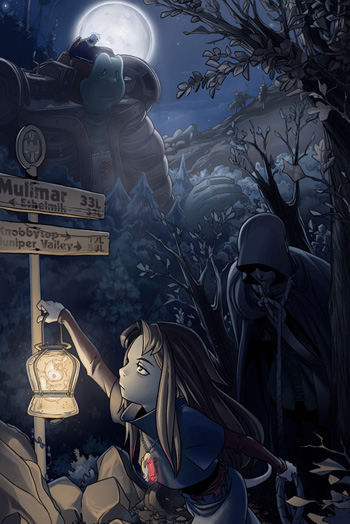 Sette leads Duane around by a more literal leash than normal.
Duane: Consider it, Sette: If a tree could think thoughts, what might it value?
Sette: Your face.
Duane: Peace. Peace in which to thrive and grow. Acutely empathic, the beast will with hostility react to your hostility. Entreat it peacefully, however, and it will in like fashion answer.
Sette: Ugh, walky roots are STOOPID critters.
— Chapter 1
Advertisement:

is a Fantasy Webcomic by Ashley Cope set in a world quite unlike our own, containing multi-faceted cultures with deep and dark histories, strangely different laws of physics, and magic so commonplace it's called by a different name.

The main story revolves around rude, loud-mouthed Sette Frummagem, daughter of the Lord of Thieves. Sette is on a mission from her Da,' and she'll lie, cheat, and steal to make sure it's a success (she'll lie, cheat, and steal anyway). Condemned to aid her in her rotten endeavours is a rotten corpse by the name of Duane Adelier, who seems oddly talented with the supernatural, and oddly not laying motionless in the dirt.

Events are quickly complicated by the appearance of the "Red Berry Boys,” a gang of criminals who at first appear to be simple slavers, but are soon discovered to have a stranger and much more disturbing agenda. That agenda appears to have an uncanny number of connections to Sette's mission, and as such Sette inadvertently finds herself wrapped up in their schemes. It's not long before she and Duane are in over their heads and under fire from all sides. Priorities change from just carrying out her appointed task to living to see the next sunrise.

The road is long and no one is what they seem. Never trust a thief, and never trust anyone who won't let you look into their eyes.

The author has also written supplemental prose stories in the same universe, which can be found here.