Make an Example of Them 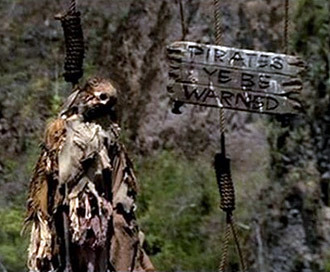 "Ye Be Warned" indeed.
"Burn it! Until it smolders. These people are traitors and must be made examples of."
— Judge Claude Frollo to a hapless miller's house, The Hunchback of Notre Dame
Advertisement:

This is for when the benefit of what you do to someone isn't so much in and of itself as about the message it sends to others, about what could happen to them. As is implied from this, what happened needs to be known in order for it to work. While the most common "example" is death, more cunning punishment forces realize that this can backfire, and will go for the Humiliation Conga and/or Fate Worse than Death.

It is often associated with governments, especially the more tyrannical of them, but not exclusively; see also the deterrence argument for the use of this in the context of more democratic societies. Also, even forces outside the law, like terrorists, criminal syndicates, and Serial Killers, apply this as well. It's also very common with revolutionary forces; with prisoners, stringing up or dumping their mutilated remains serves as a warning to soldiers of the current regime, while population centers that they suspect of being in league with the regime or even just not being supportive of them are likely to be brutalized as a "stand with us or else" message.

Often combined with You Have Failed Me, when an underling is punished brutally for failure "to encourage the others", or a Thrown from the Zeppelin-style gathering.

Note that the "example" is usually more severe than the "normal" punishment, making this Disproportionate Retribution. See also Scare 'Em Straight, which is effectively the end goal of this trope.