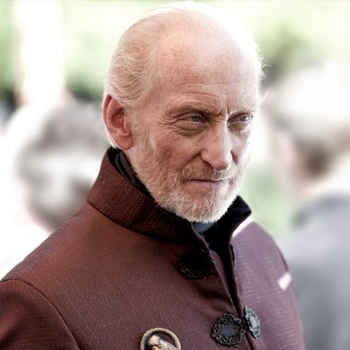 "The lion does not concern himself with the opinions of the sheep."

The ruthless patriarch of House Lannister of Casterly Rock, father (and paternal first cousin once removed) of Cersei, Jaime and Tyrion, and grandfather to Joffrey, Myrcella and Tommen. Lord of Casterly Rock, Warden of the West, and the Lord Paramount of Westerlands, the wealthiest region of the Seven Kingdoms, Tywin Lannister is the most feared and richest Lord in the Realm. Calculating, harsh, and ruthless, he is famed as a brilliant administrator, who managed the Realm masterfully during his twenty years as Hand of the King to Aerys Targaryen and is a capable battle commander. He resumes the post under his grandson, King Joffrey and he leads the fight against Robb Stark in the War of the Five Kings. Tywin's driving motive is in securing House Lannister's hold as the most powerful dynasty in Westeros, no matter the cost. Ironically, the coldness and brutality that Tywin demonstrates not only with his enemies, but also with his own family (especially Tyrion, which he hates), may end up causing his downfall...