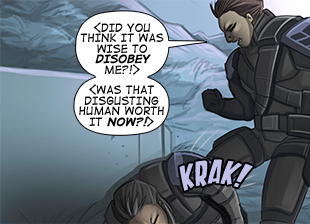 Nothing says "You Have Failed Me" like kicking a man while he's down.
"For showing compassion, Granny would condemn me to a thousand mindyears of all-pain."
— Big Barda, Gotham City Garage
Advertisement:

Whenever the villain does something bad, a punishment is always in order and you can expect them to get No Sympathy from the heroes and the citizens when that punishment is dished out. But there's one character or a small number of characters who show some form of sympathy for the villain. As a result, others call them out on it, even going as far as to say they're just as bad as the villain who committed that evil deed.

This is the trope where a character will receive punishment, ostracism, or criticism from other characters for sympathizing, forgiving, sparing, or just being plain nice to someone. In stories centered on Black-and-White Morality, one way to set a group of heroes over the edge is when someone within their group expresses pity for the villain. Perhaps the heroes consider the villain truly beyond redemption for their horrible deeds, and the sympathizer is too naive or too stubborn to understand the gravity of their crimes. In another situation, even if the sympathizer is not condoning the villain's actions, they will still get scolded by the heroes for expressing sympathy for the villain who had a bad past or upbringing, especially if the heroes believe that the villain cannot be forgiven for their crimes despite the circumstances that pushed them to villainy. If the focus is on the villain's punishment, the sympathizer would get scolded if they consider the punishment too harsh.

In other variants, the person the character sympathizes with can be someone who's not well-liked or respected by society, and they don't take kindly to those who show pity towards them. The sympathizer may be a part of a group who detests other groups and will get treated with contempt by the group if they're friendly to each other. The sympathizer may be a Reluctant Warrior and them showing mercy to the enemy can put the Proud Warrior Race to shame.

This is quite common in many wars. If there were a general who commands soldiers to kill a certain population they oppose, expect one to spare at least one life or just refuse to kill everyone. The soldier has disobeyed the general's orders, and when he hears about this, he will tell him to turn in his badge — or worse.

This is a suitable reaction towards a Stupid Good character as well as characters who are friendly to each other despite being supposedly enemies. Pushover Parents will get this for not disciplining their children. Sympathy for the Devil is also defied by this trope. Can be a demonstration on why No Good Deed Goes Unpunished.

Contrast Made Out to Be a Jerkass and No Sympathy for Grudgeholders — the former is when a character is given backlash for rightfully showing no sympathy for the offender whereas the latter is when a character is rebuked for not forgiving the wrongdoer. A Knight Templar may give out these to those whom they think are in the way of the greater good. Those who aid and abet an Outlaw are also prone to receiving this treatment — historically, such people received the same punishment as the outlaw. This can serve as one of the tenets of the With Us or Against Us philosophy if being friendly to an enemy makes them an enemy as well. Throwing roses when the authorities want you to throw rocks in Come to Gawk can produce this. Often related to You Bastard!.