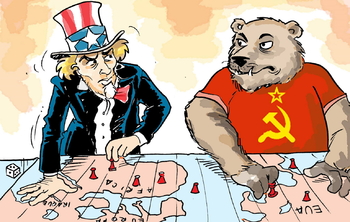 Kate Laswell: Don't make this ugly, Captain.
John Price: You give me a reason not to!
Laswell: It's a proxy war, John. We're all just pawns in this.
— Call of Duty: Modern Warfare (2019)
Advertisement:

is a military conflict where neither nation directly fights the other. Instead they provide support to third parties who are opposed, essentially attacking their enemy's national interests rather than their enemy's territory.

This usually takes place in the context of a Space Cold War between superpowers that don't want to fight each other in the open (whether due to treaty obligations, fears of Mutually Assured Destruction, or other reasons such as simply not wanting to fight a full-scale war), but aren't afraid to get involved in smaller fights. Usually, they back opposite factions in a Civil War. No matter who wins, the real losers are often the proxies themselves: the big powers are mostly interested in achieving their goals of undermining each other and couldn't care less for the damage done in-country.

A form of Realpolitik. Often factors into a Balance of Power, as it's an easy way for the major powers to shift the balance in their favor without exposing themselves to direct conflict.