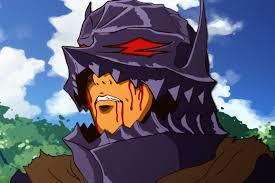 I thought helmets were supposed to protect you from damage...
Advertisement:

Some people are willing to suffer some pain or discomfort for the sake of fashion. And then there's these folks, who deliberately don clothing that hurts them for non-fashionable reasons. They might be trying to demonstrate their piety, or to atone for sin. Other times, the pain and injury inflicted by the outfit is suffered in exchange for supernatural powers. A Combat Sadomasochist or Sense Freak will likely dress this way simply because they enjoy it.

Western culture actually has a word for this - cilice.

Traditionally, cilices were garments or undergarments worn close to the skin and made from coarse cloth or animal hair. They were deliberately designed to irritate the skin, and in some cases, they also included twigs and thin wires for added discomfort. In modern religious parlance, cilice is now an umbrella term for any item of clothing designed to cause discomfort.

Compare Keeping the Handicap, when this idea is applied to injuries and other impediments that could otherwise be recovered from. See also Malevolent Mutilation.