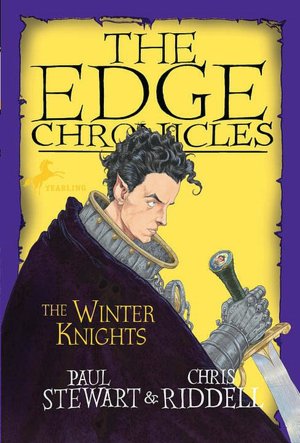 Far far away, jutting out into the emptiness beyond, like the figurehead of a mighty stone ship, is the Edge.
Advertisement:

The Edge Chronicles is a middle grade series written by Paul Stewart and illustrated by Chris Riddell. Surprisingly dark and cynical for its target audience, the novels take place on the Edge, as in the edge of the world. The series is filled with sky pirates, bizarre wildlife, and a notable aversion of many stock fantasy tropes.

It consists of trilogies (each centered around a certain character) and some additional novels and side-stories.

The second centers on Rook Barkwater.

Next up in the main series is The Immortals (2009), a novel set about 500 years after Freeglader which wraps up the first three trilogies. A fourth trilogy takes place after The Immortals and stars a lad named Cade.

Supplementary books and material include: