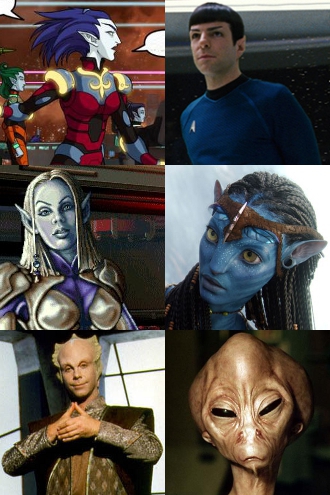 Space smugness comes in multiple flavors.note L - R, top to bottom: A Loroi, a Vulcan, an Elerian, a Na'vi, a Minbari, and an Asgard.
There are certain races in Speculative Fiction that appear to occupy an equivalent niche that elves do in a fantasy setting: the idealized, In Harmony with Nature culture reaching toward utopian ideals, or the inscrutable, ominous Fair Folk for whom We Are as Mayflies, or both at once, of course. Similar to Angelic Aliens, but Alien Angels are defined more by their ethereal appearance than their own perception of being an "enlightened" species compared to others.
Advertisement:

When they are not behaving as a standard fantasy elf or, as is often the case, an enlightened mystic race such as Vulcans or Na'vi, they are off beaming up humans, cattle, and children just like their Fair Folk ancestors.

Sometimes the elf-like race are implied to be Ancient Astronauts themselves, misremembered or otherwise. Sometimes they are literal Elves IN SPACE! or at the very least have elf-like characteristics such as longevity and Pointy Ears.

Some anthropologists have speculated that the tendency to imagine any foreign intruders who are different from us as Elves Versus Dwarves is hard-wired, like the theory that humans are hard-wired to imagine dragons because of our bad experience with snakes. By this logic, we have an innate tendency to classify "powerful" cultures as inscrutable, slender (tall and/or diminutive) beings who were here before us, have better tools and are not to be messed with, versus swarthy, hairy fellows who are industrious, engage in untouchable occupations such as mining, and are migrants. Space Elves would thus occupy an extreme niche in the spectrum.

Your Space Elves may be:

This is a supertrope discussing references to Space Elves in various tropes, including: Our Elves Are Different, Proud Scholar Race, The Fair Folk and/or The Greys. Examples of each type would also fall under such other tropes.

Compare Alien Fair Folk. Contrast Space Orcs; a crude and violent alien culture with technology to match, who might even exist alongside the advanced and sophisticated Space Elves.