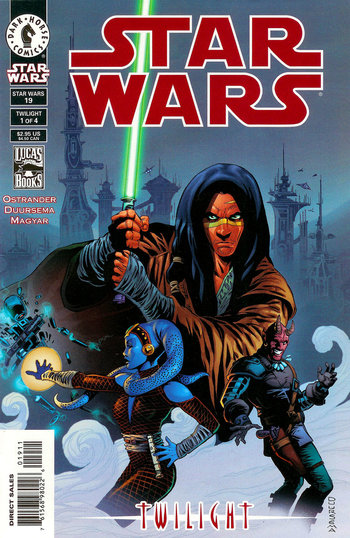 Originally conceived as a kind of anthology to showcase the vast array of new Jedi characters introduced by Episode I, the series soon developed longer storylines and recurring subplots, many of which tied in to related miniseries such as Jedi Council: Acts of War, the Jedi one-shots, Obsession and Purge (many of which were created by the same artists and writers working on Republic). By the time the series was retitled, approximately half of the stories focused on the continuing adventures of Anakin Skywalker and Obi-Wan Kenobi, while the rest focused on the Ensemble Dark Horse Jedi Master Quinlan Vos and his own supporting cast of friends and enemies.

By the time the series was finished and replaced by Dark Times and Rebellion, the creative team of John Ostrander and Jan Duursema were essentially in control of the storyline. Some of the minor characters they created or made their own for Republic subsequently appeared in their next series, Legacy, including the Wookiee Chak, the Jedi T'ra Saa and K'Kruhk, and A'Sharad Hett, later Darth Krayt.

The comic was heavily influential for the posterior TV series Star Wars: The Clone Wars, which featured both characters introduced on it (like Asajj Ventress and Quinlan Vos) and replacements of characters from the comic (Rex and Cad Bane, who were originally meant to be Alpha-17 and Durge, or Talzin, an Expy of Zalem), although the series altered heavily the canon of the comic in the process.