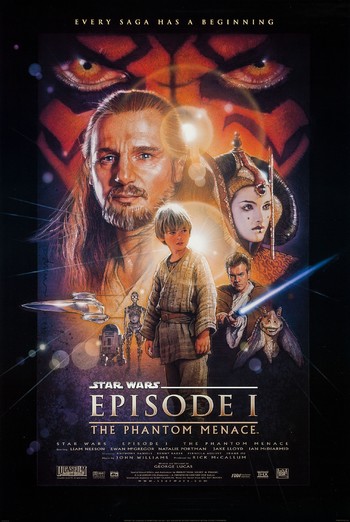 Obi-Wan Kenobi: I have a bad feeling about this.
Qui-Gon Jinn: I don't sense anything.
Obi-Wan Kenobi: It's not about the mission, Master. It's something... elsewhere. Elusive.
Turmoil has engulfed the
Galactic Republic. The taxation
of trade routes to outlying star
systems is in dispute.

Hoping to resolve the matter
with a blockade of deadly
battleships, the greedy Trade
Federation has stopped all
shipping to the small planet
of Naboo.

While the congress of the
Republic endlessly debates
this alarming chain of events,
the Supreme Chancellor has
secretly dispatched two Jedi
Knights, the guardians of
peace and justice in the
galaxy, to settle the conflict....
Advertisement:

Star Wars: Episode I – The Phantom Menace, or simply known as The Phantom Menace, is a 1999 Space Opera film and the first film of the Star Wars prequel trilogy. It was written and directed by franchise creator George Lucas, who took the director's chair for the first time since A New Hope. It was released on May 19th, 1999.

Three decades before the destruction of the Death Star, a corrupt corporate conglomerate known as the Trade Federation blockades the small, peaceful planet of Naboo in protest of rising taxes. Hoping to settle things peacefully, the Supreme Chancellor of the Galactic Republic sends the Jedi Master Qui-Gon Jinn (Liam Neeson) and his apprentice Obi-Wan Kenobi (Ewan McGregor) to act as negotiators.

Under pressure from their sinister backer, the Trade Federation's envoys attack the Jedi and invade Naboo, forcing the Jedi to flee the planet with its young leader, Queen Amidala (Natalie Portman). Hoping to petition the Galactic Senate for aid, they set out on a journey to the Republic's capital - in the process encountering a young boy named Anakin Skywalker (Jake Lloyd), who is unnaturally strong in the Force...

The film is followed chronologically by Attack of the Clones, The Clone Wars, and Revenge of the Sith.

The Phantom Menace contains examples of:

open/close all folders
Tropes # to E
Tropes F to N
Advertisement:
Tropes O to Z
"And you, young Skywalker. We will watch your career with great interest."
Feedback