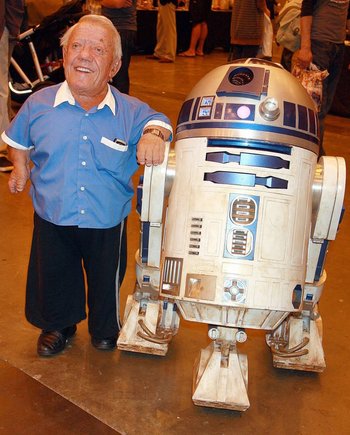 "There are not very many opportunities for little people in the industry. There are small parts and character parts, but we don't get the girl-at-the-end-of-the-film kind of parts... but I was quite happy with what I was doing."
Advertisement:

Kenneth George "Kenny" Baker (24 August 1934 - 13 August 2016) was an English actor and musician best remembered for portraying the Badass Adorable astromech droid R2-D2 in the Star Wars movie franchise. He was born in Birminham, Warwickshire, and educated at a boarding school in Kent. His first taste of show business came in 1951 when he was invited to join a theatrical troupe of dwarves, and he later joined a circus, learned to ice skate, and formed a successful comedy act with Jack Purvis called the Minitones.

While working with the Minitones, Baker was selected by George Lucas to operate R2-D2 in Star Wars, which would become his Star-Making Role. He subsequently appeared as the droid in six of the Star Wars films, as well as the Ewok Paploo in Return of the Jedi. Baker served as a consultant for R2-D2 during the filming of Star Wars: The Force Awakens, and he was invited to attend the premiere of the film, but at the time he was too ill to travel. He died eleven days before his 82nd birthday.