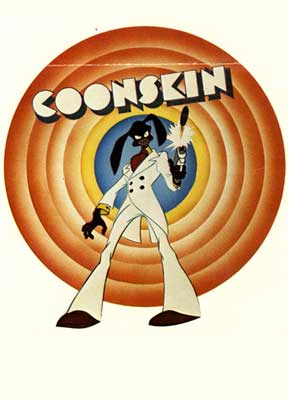 I'm a natural blackface, part of my race, and up my sleeve I'm holding an ace, that I won't die in disgrace...
"Warning: This film offends EVERYBODY!"
— The blurb on the movie's VHS box
Advertisement:

Coonskin is a 1974note The copyright year in the opening credits says 1974. live action/animated Blaxploitation Parody written and directed by Ralph Bakshi, and produced by Albert S. Ruddy (The Godfather). A Darker and Edgier take on the African-American Br'er note pronounced "bruh", for brother Rabbit folk tales, as well as a satire of the racial controversy surrounding Disney's Song of the South, which is based on the folk tales, Coonskin has been described as a spiritual predecessor to The Boondocks. Bakshi once described it as his best film.

Al Sharpton and CORE held mass protests on the film (without seeing it; Sharpton famously said "I don't got to see shit; I can smell shit!") despite its support from the NAACP as "difficult satire". In spite of the firestorm of controversy it spurred, the film has since been Vindicated by History, lauded by the likes of Quentin Tarantino, Spike Lee and the Wu Tang Clan as a transgressive masterpiece.