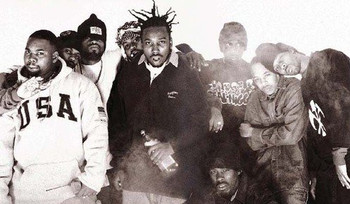 "Cash Rules Everything Around Me. CREAM, get the money. Dollar dollar bill, y'all!"
Advertisement:

When it comes to Hip Hop music, chances are you'll come across the Wu-Tang Clan, a collective of nine (now eight) men reading to throw in some beats and Shaolin/Wu-Tang style.

A Hardcore Hip Hop group from Staten Island, New York City that has been active musically since 1992, Wu Tang stopped being something to fuck with around the time you heard 'em for the first time, son. Their fame is largely derived from their Signature Style: highly conceptual lyrics with frequent name-dropping of comic books, an obsession with Hong Kong martial arts films (especially older classics from Shaw Brothers) note their name comes from the martial arts movie Shaolin and Wu Tang and their Crazy Awesomeness.

They ain't nuthin' ta fuck with.

The group's lineup is:

"Tropes rule everything around me":