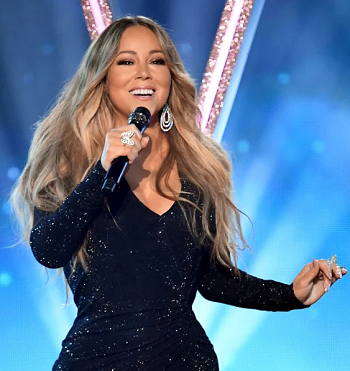 "Mariah is the idol smasher who made singing both better and worse at the same time. She made it better, because Mariah is a master at melisma. She so popularized the art of singing several notes on one syllable that this has become a part of the pop-R&B singer arsenal, used by everyone from Beyoncé to Christina Aguilera. Yet she made it worse, because she inspired a generation of lesser, oversinging warblers."
— Danielle Belton, The Root

Mariah Carey (born March 27, 1970)note Her and her twins' birth certificates state she's born in 1970 fanpop.com/clubs/mariah-careys-lambs/images/22216353/title/mariahs-twins-birth-certificates-photo is a singer/songwriter who debuted in 1990 with her hit "Vision of Love". She is famous for her wide vocal range and hitting almost inhumanly-high notes in her songs. Initially, she sang old fashioned ballads and was a rival for Whitney Houston, but after divorcing Tommy Mottola, she began collaborating with rappers, evolving into a more contemporary R&B sound.

Carey has also been known for her five octave vocal range,note Some claim seven, but if that were true, she'd either be able to sing like Barry White or sing in a register only dogs could hear which she attributes to the nodules she's had on her vocal cords since childhood. With them, she is able to use the belting technique and the whistle register which have become signature characteristics in her songs.

In 2001, she suffered a Creator Breakdown after the film Glitter and her album of the same name flopped, leading to a bizarre incident where she performed a semi-striptease on TRL. She was hospitalized for exhaustion and many thought her career to be over, but in 2005 she blew away the charts with The Emancipation of Mimi, and the world has never again questioned her relevance to pop culture.

Many publications proclaim her as the best selling female artist of all time, with worldwide record sales of over 230 million. She has the most Billboard Hot 100 #1 hits for a solo artist, with 19 under her belt.note The music group that has the most #1 hits is The Beatles with 20 of them. Some of those hits include classics such as "We Belong Together," "Vision of Love," "Hero," "Fantasy," "Always Be My Baby", and "All I Want for Christmas Is You".note That song took 25 years(!) to get to number one on the Billboard Hot 100, although being a Christmas song certainly helps.

After feuding with Eminem over whether or not they were ever together, she settled down and got married to Nick Cannon in 2008, becoming a mother (of twins) in 2011. Unfortunately, the couple separated in 2014, and their divorce was finalized two years later. She's currently in a relationship with backup dancer Bryan Tanaka.

She served as a judge on American Idol in its 2012 season while recording new music. She left Idol a year later to tour. In 2018, she revealed that she had been diagnosed with bipolar II disorder during her Creator Breakdown in 2001.

"I had a vision of tropes, and it's all that you've given to me":

Whoever gave away Mariah Carey will be wishing for her after hearing this note!

Whoever gave away Mariah Carey will be wishing for her after hearing this note!